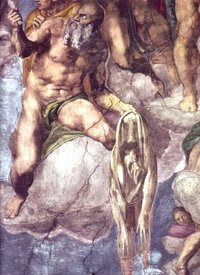 The Fantasy Football Preparation Period begins in earnest today; we now know 99% of what we need to know for the Fantasy Football Draft. And to all the people in my league: what do I need to do to convince you that I DON'T want Randy Moss? Is it even possible? If I try convince you I'm not targeting Moss, will you just take that as further evidence I am targeting Moss? I was just telling my wife that everybody is going to think I want Randy Moss and that I should spend the next four months convincing everybody I'm in love with him. She then claimed that I do want Randy Moss, that I am in love with him, and that there's nothing I can do to convince HER that I don't desperately want Randy Moss. But I want you all to know: I don't want Randy Moss.

If Tom Brady throws for 30+ TDs this season, it will give obnoxious New Englanders a chance to say "See? When Brady has all-pro WRs, he can do the same things Peyton Manning does with all-pro WRs." That's probably the saddest thing of this all. No, the saddest thing is that Moss isn't returning to Minnesota. I can't imagine a greater happiness than having Randy come back to the Vikes.

The Pats could be running a wild offense next year: Corey Dillon is gone, and they've added Donte Stallworth, Kelley Washington, Wes Welker, and now of course the Wonderful Wizard of Moss. Run-and-shoot? Moss could catch 200 5-yard passes, because DBs will play off him for fear of his speed, and the Pats love the short passes.

The Madden '08 Patriots are going to be unbeatable. Nobody should be allowed to play as the Pats when competing head-to-head. It won't be fair. Hell, I'm not sure it will be fair playing the real Patriots. I fully expect a 15-1 season (and I expect them to get to the Super Bowl and get upset by the Vikings behind Adrian Peterson's 150 yards).

Randy is now going to be on TV all the time. That is the most pleasing thing of this all. And now that Randy is on a winner, he should be motivated.

Brett Favre will not break Dan Marino's TD record with a pass to Randy Moss. I am now so utterly relieved I don't know what to say.

I'm also relieved that Randy Moss isn't going to stroll into the Metrodome this season, as a Raider or as a Packer. If he stays with the Pats, we don't have to play him at all for four years (except, of course, this year's Super Bowl), and not in the Dome for eight years.

What number will Randy wear?

Will a motivated Randy Moss return to his old productivity? How will the Patriot offense utilize him? Will he still be a great deep threat (I think so--Brady can hit him on a lot of jump balls)? Can Randy now get back to the business of chasing all of Jerry Rice's records? Will Moss continue is exceptionally great playoff production with the Pats? How much will I have to pay for him in a fantasy football auction? Er, I mean, how much will some sucker pay for him in a fantasy football auction?

Well, good for you, Randy Moss. Screw you, Patriot fans. While you revel in the success of the Red Sox and Patriots, we have to imagine Lombardi Trophies and reminisce about the good old days with #84 tearing up the Metrodome.

But it doesn't matter: we've got our own new superstar offensive gamebreaker. I'm convinced Adrian Peterson will go down as the greatest running back in franchise history: he'll pass by Chuck Foreman and Robert Smith in both the record book and the hearts of the fans. But enjoy Randy--I think you will.
Posted by Pacifist Viking at 1:07 PM