I love reading the blurbs on the backs of football cards--frankly, I wish I had a job writing the blurbs on the backs of football cards. The best blurbs are written for lousy or average players. The writers usually go to great lengths to praise the players for the most minor of achievements. Here at PV, we'll chronicle and interpret some of the best. We'll try to make this a regular feature.

"Frye showed a lot of moxie as a rookie under center, and it was evident when he defeated the Raiders in Week 15."

With all due respect to Jonathon Moxon, here's what "moxie" really means:

"He's not very good at all, but he tries really hard and shows some sort of charisma despite his lack of talent."

Let's be honest: Peyton Manning is never said to have "moxie." Moxie is reserved for scrubs.

It's also interesting to find that "he" defeated the Raiders in Week 15 of 2005. Evidently the rules of football were changed and one man, Mr. Charlie "moxie" Frye, was able to take on the entire Oakland franchise all by his lonesome. No doubt that was impressive--"he," Charlie Frye, beat the Raiders. Even though the '05 Raiders were 4-12, it's still impressive for a single human being to be responsible for one of those twelve losses.

That Cleveland victory over the Raiders? The score was 9-7. The moxie of Charlie Frye got his team 9 points; luckily the incompetent Raiders couldn't muster more than 7 points. For the game, Frye threw for 198 yards and an interception. Somehow that was enough--Frye did help the Browns score a total of 3 field goals on drives of 23, 45, and 43 yards. I think it is perfectly reasonable to claim that Frye beat the Raiders. 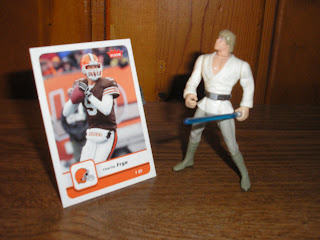 "Come see my moxie, Luke! It's a lot like the Force."
"But I wanted to pick up some power converters!"
Posted by Pacifist Viking at 10:48 PM