On a Boring NFL Offseason 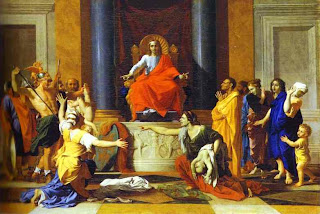 " To every thing there is a season, and a time to every purpose under the heaven," says Ecclesiastes.

"To every thing there is an off-season, and a time to be bored with no purpose under heaven," NFL fans say.

NFL fans suffer through the longest offseason of any major sport. But since the NFL season is an all-consuming Leviathan, sucking up all of our Sundays, most of our Mondays, and occasional Saturdays and Thursdays, it's refreshing to have the offseason. The NFL season leaves us with little leftover energy for life--life becomes what we do between games, waiting for our next chance at football. Now we have life, which is good, but we also have a long, long wait.

Sure, we distract ourselves with football. We plan a fantasy draft, we glob onto any NFL news we find (half the "stories" that we talk about now wouldn't even merit notice in October--everything seems to change during that first Sunday of football), we talk and argue and dream. But this offseason has been particularly brutal. What's really happened? Early in the offseason there were some surprising coaching changes, but coaching changes don't get me through the night. Looking back, the only big-time current star to switch teams has been Willis McGahee (though there are other interesting moves, like Dre Bly and Travis Henry to Denver). The draft is shaping up to be boring--I'm just not seeing any major excitement in the buildup.

Perhaps the offseason has seemed like vanity and striving for the wind because I root for the Vikings. The Vikes have better potential for 2007 than people are giving them credit for--they defense is good and they lost a lot of close games in 2006. But the offense is so tremendously dull and feckless, particularly the passing game. It's fun to watch a good passing game, and the Vikings are far from competence in this area, and in the offseason have thus far done nothing to move toward competence in this area. We're told that Tarvaris Jackson and Brooks Bollinger will compete for the starting quarterback job (they of the 9 combined career TD passes). The only WR added so far is Bobby Wade, and so Troy Williamson (he of the complete inability to adjust to a ball, or seemingly to catch it) is our best WR. Our new TE is a blocker. The #7 pick in this year's draft doesn't seem to be a place for the Vikings to take major strides improving the passing game. I'm not pessimistic about the Vikes in '07--I do believe the Vikings have a shot at a division title. But I'm not excited.

But if the offseason has been dull so far, it can only get worse. After the draft, all real potential or interest in football goes on hold until August. Sure, there are mini-camps, which reveal next to nothing. And August isn't that fun either--I've watching dozens of Kansas City Chiefs' practices, but preseason games are mighty dull, too. During May, June, and July, you can either hope to like baseball or basketball, or you take the time to fulfill your other hobbies in life (for me, this is a time for my most intense and fevered reading).

And so, we blog. Isn't that part of it all? We blog about our favorite football teams during the season, and we have tons to say about that all. But the NFL-focused football blogs that I still read every day seem an exercise in distraction, a forceful attempt to make football matter at this time. Blogging gives us a chance to think about and talk about our teams, even as when there is nothing going on with our teams worth thinking or talking about.

Who else is feeling it? Does this offseason seem more boring than recent offseasons past? Do you feel like there's less real football content out there for us to think about and talk about?
Posted by Pacifist Viking at 11:39 AM