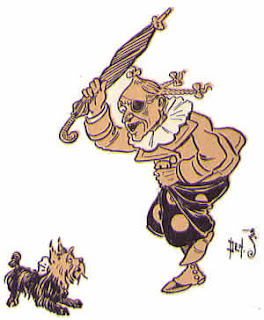 The Star Tribune has a few good news stories on the Vikings. First, Adrian Peterson won't need surgery on his collarbone. Second, Pat Williams is fit and ready to play, and he wants to sign a contract that will allow him to retire a Viking. Williams has been the best player on the team for the past two years, so it is good news that he feels healthy and fit, and it's good news that he wants to re-sign with the Vikes. They should do whatever they can to keep him.

In animal torture news, ESPN (via Ballhype) and The Virginia-Pilot (via PFT) report that there may be a witness/informant that places Michael Vick at dog fights. It is important to remember that humans facilitating dog fighting is torture of animals. If I put a bunch of sharp knives at the end of a stick, started wacking a dog with it, and in the end tried to rip the dog's neck with this tool, you'd say I'm a pretty sick person, wouldn't you? When you train dogs to attack and kill each other in a controlled setting, for your own entertainment, you are doing little different. I don't know that those dogs face less brutality than a cow entering a slaughterhouse, or a chicken raised for food. I don't think the cow, the chicken, or the dog are given much dignity in such lives. While I may not place much moral difference between the treatment of those animals, society, and the law, does (I do also see a moral difference in intent: dog fighting is intentional torture of animals for the purposes of entertainment and gambling). But let's not minimize the significance of evil involved in dog fighting.
Posted by Pacifist Viking at 9:28 PM