Setting up the Barricades 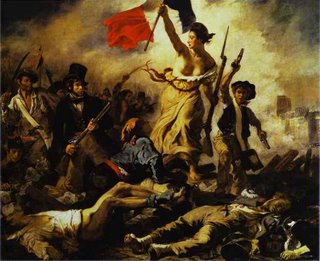 In life, there are a great many factors we have no control over. This includes many things we are personally invested in: Hazard, like Death, has sway over all.

Nobody knows this better than sports fans. We get emotionally involved in things we have absolutely no control over. We can't do anything about it. Borrwing from the Ragnorak's language of the "Tarvaris Revolution," we can't just go down to Winter Park and set up barricades until Brad Childress benches Brad Johnson. The masses want it to happen, but NFL franchises are like royalty; sure, in the long run they have to have some concern for the people, but decisions are made autocratically and the people have no control. The masses all recognize that Brad Johnson is finished, but Louis XVI, er, Brad Childress doesn't care for the masses--he'll run the country any way he pleases. Well, I guess he should. But still, let's do our best.

Brad Johnson needs to be benched. I, personally, would like to see Brooks Bollinger as the intermediary to the Tarvaris Jackson revolution. Let's go in easy steps--the French Revolution led to the Terror and Napoleon, so we don't need to go storming the Bastille and immediately overthrowing everything. The Tarvaris Revolution is an inevitability, but we can ease the process with Brooks Bollinger's interregnum.

But Brad Johnson isn't the answer, and needs to face the metaphoric guillotine. All we can do to further this transition is to blog about it. So, Liberte, Egalite, Fraternite: Viking bloggers, unite! Let us never rest until Brad Johnson is safely on the bench, and either Brooks Bollinger or Tarvaris Jackson is leading the Purple offense.
Posted by Pacifist Viking at 2:52 PM