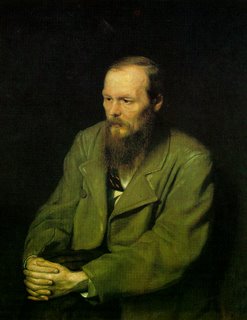 Dostoevsky, Toothaches, and the Vikings
Here is an excerpt from Dostoevsky's Notes from the Underground, in which the man from the underground describes the agony of a toothache:

"The groans are an expression, to begin with, of all the pointlessness, which the conscious mind finds so humiliating, of your pain; it's a law of nature, for which, of course, you feel the utmost contempt, but from which you nevertheless suffer, while she doesn't. They express your awareness of the fact that nobody has inflicted the pain on you and yet you feel it, your awareness that in spite of all the Wagenheims you are utterly at the mercy of your teeth; that if something wills it, they will stop aching, and if it doesn't, they will go on aching for another three months..."

"'I'm disturbing you,' he seems to say, 'I'm lacerating your feelings and preventing everybody in the house from sleeping. Well, don't sleep, then; you ought to be feeling my toothache all the time.'"

I will let Dostoevsky speak for me today, and this is all I will say about the Vikings after their loss to Miami now gives them four losses in a row.

True Stories With Jake Plummer
With 24 seconds left and down by 8 against the Chargers with no timeouts, the Broncos, through a combination of efficiency and luck, found themselves on the Charger 32 yard line. They had improbably positioned themselves for a chance at a win. I told Possible Flurries that an interception from Plummer was an inevitability. I asked what she'd like to bet that Jake Plummer throws another interception before the game was over. I told her that if Plummer throws an interception, she has to drive to my parents' house on Wednesday; if he doesn't, I'll drive. She agreed. On the very next play, Jake Plummer felt a pass rush and scrambled off to the sideline. He was then hit and fumbled; the ball rolled far back and was recovered by the Broncos in bounds, allowing the clock to run out. A horrible Plummer mistake cost Denver a chance to win the game. Alas, I bet he'd throw an interception, so while I certainly won the spirit of the wager, I lost in the letter. The moral is, don't get too specific in predicting exactly how Jake Plummer will blow a football game. True Story.

Watching football with newbies
My sister, Partly Cloudy and Pleasant, is fairly new to watching football all the time, but can be delightful to watch games with. Because she doesn't really know anything about football, she brings a fresh viewpoint to things we take for granted. For example, she thinks teams are so stupid to continually run up the middle. Why would you try run where everybody is? Why just run into a pile of people? It usually doesn't work; why wouldn't you try run where all the other people aren't? And to be honest, I haven't found a satisfactory way to justify the high number of runs up the middle for very little gain to her.

She also laughs like it's the funniest thing in the world when a running back tries to jump over the pile for a touchdown. This little bit of fancy is enought to amuse her, while A Bit More Humid and myself just sit calmly watching the TV.

Meyton Panning and Harvin Marrison
Though Reggie Wayne is certainly a very good WR, the best WR on the Colts is still Marvin Harrison, right? And Marvin Harrison, almost without exception, is always lined up on the right side of the formation (the Colts are unique in not moving their elite WR around the field in different formations). Yet the majority of the time Peyton Manning drops back, he doesn't even look to the right. Seriously (if Harrison is on your fantasy team, you will figure this out quickly).

My theory is that Manning is actually so used to reading defenses, so used to playing with Harrison, and so used to having Harrison on his right side, that Manning can know what is going on without even looking at Harrison. If Harrison is going to be covered, he'll know it and look the other way. If the coverage shows that Harrison can get open, he'll look right and probably throw it right.

(by the way, the subtitle is not a typo. I like to reverse the the letters of a person's first and last name and see if it would make a good "Star Wars" name. Sometimes it does, sometimes it doesn't. I'll let you evaluate Meyton Panning and Harvin Marrison for yourself).

Tadainian Lomlinson
Is Tomlinson already a Hall of Famer? Seriously, look at his numbers. Going into this season, he had never had less than 1,200 yards (over 1,600 twice), never had less than 50 receptions (high of 100), and never had less than 10 touchdowns (high of 20). Through ten games, of course, he already has 1,000 yards, 22 touchdowns, and 47 receptions. Yes, by trading draft picks in fantasy football I essentially traded Tomlinson for Clinton Portis and Steve Smith. And look at your fantasy league: does whoever is in first place (or at least has the most points) have Tomlinson? When he retires, he'll be on a short list of the all-time greats, and he's already in the Fantasy Football Hall of Fame.

Speaking of Tomlinson, it is absolutely delightful to watch NFL teams run plays that usually work successfully on Madden. On Tomlinson's TD reception, he was in the backfield and the Chargers were in the shotgun with WRs spread around the outside. Tomlinson quickly cut out of the backfield to the middle of the field. He was covered by a linebacker and easily breezed past him, and because of the spread formation, there were no other defenders around to tackle him as Tomlinson ran relatively easily to the endzone. This is absolutely a consistently effective video game play.

In many ways, I'm a weak man
Yes, the Packers' 35-0 loss against the Patriots at home dulled the blow of the Vikes' defeat. A Packer loss always does.

And just remember, as Fiyero sings in "Dancing Through Life" in "Wicked":