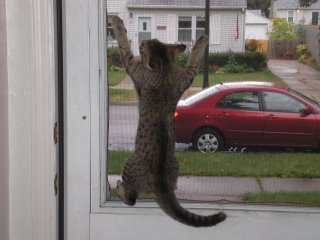 Only eight more weeks of full-out football to go (and sadly, one of those gets lost, to me at least, because it is Christmas Eve). No more bye weeks; now it's everybody going full-tilt four eight straight weeks. Then 11 playoff games, and it's back to living an authentic life that doesn't revolve around looking forward to Sunday. Or you can cling in expectation, like a cat hanging on a screen door.

How I Know It's Football Season
I have a Viking credit card; it's purple with the team logo. For most of the year I use this card without thinking about it and usually without comment. Then, suddenly, I realize every time I'm using it, people start talking to me about the Vikings. This week at a post office they started talking about the Vikings; at a gas station last night the female attendent said "My dad would love you!" (Tell me, PLEASE, what is an even reasonable way to answer this exclamation!). People start talking to me about how the Vikes did the previous weekend, what games are coming up, and how they feel about the team. I usually don't get say anything of substance in return.

Vikings-Packers
I work in Wisconsin. I've lived in Wisconsin. How this game turns out affects how I face the world the following day. I'm either on the edge of a breakdown or incapable of holding back a smile. I never know whether to be confident or terrified going into this game, and it never really matters. The teams split or sweep each other seemingly regardless of records. But so much depends on a red wheelbarrow, er, this game, regardless of the standings.

The Chicago Urlachers v. the New York Tikis
Flex scheduling is already working to our benefit. This should be a fun game. I've noted many times that I like Eli Manning and think he's a fun player to watch. He'll have to show us a lot to lead the Gigants to victory over the Bears.

One year ago
One year ago the Vikings were 3-5, were getting ready for their second game with BJ as starter, and were going to play the competent Giants on the road; the Vikes hadn't won a road game all year and had struggled on the road for...well, since as long as I've watched football, I guess. The Vikings somehow beat the Giants with an interception return for TD from Darren Sharper, a kickoff return for TD from Koren Robinson (he's been missed more than I thought he'd be this season), and a punt return for TD from Mewelde Moore. The Vikings were inexplicably 4-5 and were actually in the middle of a very enjoyable 7 game winning streak. Are the Vikings better off or worse off than they were a year ago?

Enjoy the weekend, everybody. Except Packer and Bear fans.
Posted by Pacifist Viking at 2:08 PM