Chauvinist Language in Sports (and the revelations of reversal) 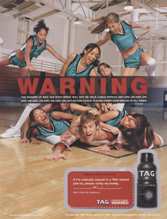 As you can read at The Big Lead, Awful Announcing, and Sports Media Review, ESPN's Mike Greenberg used the expression "manned up," on the radio, and invented the opposite, "womanned down." Some people are, reasonably, upset about this.

It's funny: it takes somebody using the opposite form of the "man up" cliche for more people to realize that the sort of language we use to describe sports is often macho and chauvinistic. The expression "man up" already implies that men are supposed to be "tough," that an athlete should "act like a man," which is indirectly contrasted against acting like a "girl." The expression "man up" means "don't act like a girl," and it implies that acting like a girl is inferior to acting like a man. As Jonathan Weiler writes on the above linked Sports Media Review:

"there is no way to interpret what Greenberg said other than in the following terms: that to be a “man” is to tell the truth and to be a woman is to prevaricate, lie and dodge responsibility.... And, at the least, Greenberg’s remarks this morning are the reduction ad absurdum of this “man-up” business. If Greenberg wants to make fun of his own manhood, however he defines that, that’s one thing. But to insult every woman in the process strikes me as quite another."

Gender roles and perceptions have a huge impact on our language and culture. For a fun experiment sometime, try reversing the gender roles in commercials you see and decide whether the results are in any way appropriate. For example, look at this ad for TAG body spray that shows a guy getting tackled by eight evidently horny women. The TAG body spray is so powerful, they evidently can't control themselves. Now, reverse the gender roles; imagine that's a girl getting attacked by eight men. Think about the perception of the image: eight men desire sex with a woman, so they violently, forcefully attack her to pull her down. Clearly, that's an inappropriate and sickening image.

When you reverse the gender roles of our language, culture, and imagery, you realize how inappropriate they can be, as well as how demeaning they can be.

(picture from here)
Posted by Pacifist Viking at 1:11 PM