Coming off the ledge and Nuggets of Wonderment: "Stick a fork in me, Jerry; I'm done" version 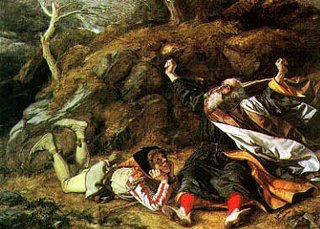 "When we are born we cry that we are come to this great stage of fools," sayeth King Lear. I would rather contemplate the absurdities and tragedies of existence than think about the Vikings, but of course, I am not allowed such cowardice. Rather than listen to sports radio this morning, I listened to NPR, but twice on my drive they gave the Packer-Viking score and summary. I grimaced each time. Literally, I grimaced; I frowned and squinted in the car by myself. Yes, the weekly existential crisis has been set on.

Waiting for Tarvaris
The Vikings have combined an unbeatable run defense with a ridiculously inconsistent and foolish pass defense. On Donald Driver's long TD, Schmoe Whittaker was covering him. On two of his long 3rd down catches, linebacker (and backup linebacker) Dontarrious Thomas was covering him. What is this, Madden? Is some sort of AI running the Viking defense?

The Viking offense has been disappointing in 2006 for four reasons.
1. No WRs have stepped up. Kornolio is gone, Troy Williamson has stonehands, Marcus Robinson keeps getting hurt, and Travis Taylor is...well, he's just Travis Taylor. Bethel Johnson is showing flashes, but that's the thing about Bethel Johnson: all his career he's shown flashes. Billy McMullen parlayed being uncovered and picking up a fumble right in front of him to a 2 TD game; that doesn't make him a legitimate WR.
2. The offensive line has not performed as well as their names and salaries suggest they should.
3. Brad Johnson has a limp arm.
4. The offense shows NO creativity. None. Basic run plays and basic dropback pass plays; that's the Vikings.

Favre Tally
2 TDs. Yay! At least during the broadcast we got mandatory mention of his games streak (at least later they mentioned Jim Marshall and Mick Tinglehoff), whether he'll retire or not, and how much fun he's having.

Utilitarianism
Since I've been a Viking fan, has the team brought me more joy than sadness? I think so, but I don't know.

The playoffs will be fun
I of course intend to eke out all the pleasure I can of the regular season. However, the playoffs should be fun. The Bears are the best NFC team, but nothing they've done has suggested to me they can't be beaten in the playoffs. The AFC will feature the usual suspects (Indy, Denver, and NE), as well as a few other teams that could make things interesting. It'll be fun.

Maybe more later.
Posted by Pacifist Viking at 7:52 AM