Was Deion really wrong about Vick? 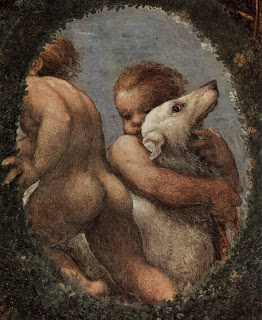 In Don Banks' recent Snap Judgments column, here's what he had to say about Deion Sanders' comments on Michael Vick:

"Whoever I have to thank for pulling the plug on those Deion Sanders columns on the Michael Vick saga, much obliged.

"'What a dog means to Vick might be a lot different than what he means to you or I,' Sanders wrote in the Fort Myers (Fla.) News-Press. That's some twisted logic that Sanders employs to explain Vick's alleged off-field hobby."

Was there something else in Deion Sanders' column that featured "twisted logic"? To find out, I went to Ballhype and found Sanders' column "Don't be too quick to judge" in the The News-Press. Let's look closely at this column, since this column has been criticized by more sportswriters than Banks.

Sanders begins by talking about the potential effects of the Vick indictment. All the things he says are pretty indisputable. Sanders then transitions with "This is all the result of perspective," and talks about how different people treat their dogs. When he describes how Vick might feel about his dogs, Sanders writes:

"You can still choose to condemn him, but I’m trying to take you inside his mind so you can understand where he might be coming from."

Sanders isn't trying to justify dog fighting or exonerate Vick from the alleged actions: he's merely trying to "take you inside [Vick's] mind," doing some long-distance psychoanalysis. He's not excusing, but trying to understand. That sounds good to me: even if you are going to condemn a person/group for any action or idea, it is worthwhile to try understand how that person/group thinks.

Sanders then says of the accusations, "All of that is enough to make me cringe," with a diversion story about his own dogs. He then asks why Vick particularly is being targeted:

"Are we using Vick to get to the ringleader? Are we using him to bring an end to dogfighting in the United States?"

These are reasonable questions. Law enforcement officers are targeting Vick because they believe he committed a crime. But why is the media giving it so much coverage? Why are animal rights groups devoting such energy to it? Sanders isn't wrong to ask these questions.

Sanders then calls Vick's alleged involvement "wrong," "stupid," and "immature." It doesn't appear to me that he's trying to justify Vick's actions.

Then he comes with a statement that a lot of people have picked up on to criticize:

"I believe Vick had a passion for dogfighting. I know many athletes who share his passion. The allure is the intensity and the challenge of a dog fighting to the death. It’s like ultimate fighting, but the dog doesn’t tap out when he knows he can’t win."

Let me ask you this: can you dispute this statement? Remember, Sanders isn't trying to justify Vick's alleged participation in dog fighting; all he's trying to do is "take you inside his mind so you can understand where he might be coming from." If you take "Vick had a passion for dogfighting" out of the context of the column, then you might criticize it. But Sanders is not trying to justify Vick's actions; he's merely saying he believes "Vick had a passion for dogfighting," which is, after all, probably true!

Sanders then makes the comparison between the status that comes with dog fighting to the status of wearing expensive jewelry or driving expensive cars. An odd comparison, perhaps, but again, Sanders is just trying to help people understand why Vick (or anybody) might be involved in dog fighting.

Sanders then uses the "Humans before animals" argument, suggesting we should focus more attention on the bad things that happen to people (like Darrent Williams or Antoine Walker) than to animals (a viewpoint that I know is shared by many in the mainstream). Next he suggests the dog fighting indictment is getting so much attention because it's a dull period of the sports year (which is partly true), and that Falcon fans should hope Vick comes back or they have to watch Joey Harrington (which is true).

After reading Sanders' column, I can't see what the controversy is about. What did Sanders say? From the reaction of some reporters, you'd think Sanders said Vick was right to murder dogs and we all should murder our dogs, too. What Deion Sanders said was fairly reasonable, and most of it can't be disputed too strongly (unless you pick and choose which quotes to use to imply that Sanders is justifying Vick's alleged actions).

"All I can say is this: These players, and player-sympathizers who write about the quasi-justification of NFL players being involved in this detestable bloodsport, need to start understanding what the rest of us in the United States think. Dogfighting is sick, and whoever participates in it is equally sick."

Sanders wasn't giving a "quasi-justification," at least not in my reading: he was explicitly trying to help people understand Vick's perspective, not trying to justify any actions. He called Vick "wrong" and said we could still condemn him, but that we should try to understand him first. And for some reason what matters to King is consensus: King lumps Sanders with those that "need to start understanding what the rest of us in the United States think." Mr. King, I happen to think meat eating is sick (though I don't consider "whoever participates in it" to be "equally sick"). But of course my views are not "what the rest of [...] the United States think[s]," so clearly my views don't matter. With King's use of the word "us" here, he seems to imply that if you don't follow the consensus (which he belongs to), you better realize what everybody else thinks and shut up.

Jennifer Floyd Engel of the Star-Telegram used the sub-heading "Idiot alert" to tell us that Deion Sanders tried to "defend" Vick (which he didn't), and picks quotes to criticize without recognizing the larger point of the column, which wasn't to justify dog fighting but to explore why Vick might enjoy dog fighting and why Vick is getting so much attention.

Don't just read the passages some sportswriters have selected for criticism, and believe their (flawed) interpretation that Sanders is trying to defend Vick or justify dog fighting. Go read the column yourself and tell me which parts you would actually dispute (and you indeed might find parts to dispute).

Of course, "When Sanders submitted his follow-up column responding to the criticism to the NFL Network, the network refused to let The News-Press publish it on Sunday" (USA Today). That's too bad, because I would like to hear some further thoughts (and perhaps clarifications) from Sanders.

(And there are other ways for us to protect dogs from suffering: Simon Cowell reminds us never to leave a dog in a hot car. Keep your dog cool this summer!).
Posted by Pacifist Viking at 8:41 PM