From Virginia to Pamplona 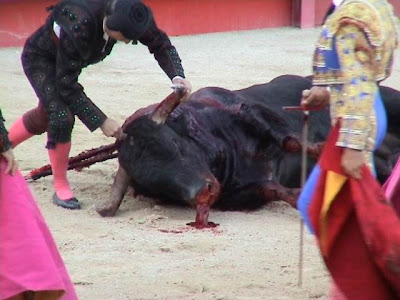 (Here is another post that's partly about sports, but also moralizing analysis on animal rights. As always, it's your choice to keep reading or not).

Following the Vick dog fighting allegations story has been frustrating and illuminating. There are intensely heated opinions and arguments from all sides, some rational, some not. I rarely write about the alleged crimes or personal issues of athletes on this blog; it's just not a part of sports that interests me. But since I'm a sports fan and an animal rights activist, I try to write when an animal cruelty story intersects with sports. I hope that I'm in a position to offer a unique perspective, and I usually try to offer insights on these issues that might be unexpected. For example, when I wrote about Barbaro, I suggested there's something fundamentally flawed about meat-eaters mourning over one particular horse; when I first wrote about the allegations of dog fighting at Vick's property, I suggested a lot of the outrage was misplaced considering how many forms of animal cruelty are openly accepted in our society.

There have been some questionable motivations behind some of the writing on the Vick allegations. I can't know another's motivations well, but I hope I have kept my focus, as Leave the Man Alone puts it, "on the actual crimes at hand and not just the undermining of Michael Vick." Going forward, I'll be following this story regardless of Vick's role in the story, because for me Michael Vick is not the main theme of this story.

Perhaps it is worthwhile to shift from dog fighting, a pseudo-sport devoted to animal torture, to bullfighting, another pseudo-sport devoted to animal torture (though Hemingway writes in Death in the Afternoon that "The bullfight is not a sport in the Anglo-Saxon sense of the word, that is, it is not an equal contest or an attempt at an equal contest between a bull and a man. Rather it is a tragedy; the death of the bull, which is played, more or less well, by the bull and the man involved and in which there is no danger for the man but certain death for the animal").

According to Wikipedia, Spanish-style bullfighting has three stages. In the first stage "The picador stabs a mound of muscle on the bull's neck, which lowers its blood pressure, so that the enraged bull does not have a heart attack. The bull's charging and trying to lift the picador's horse with its neck muscles also weakens its massive neck and muscles." In the second stage, "the three banderilleros each attempt to plant two barbed sticks (called banderillas) on the bull's flanks. These further weaken the enormous ridges of neck and shoulder muscle through loss of blood, while also frequently spurring the bull into making more ferocious charges." And finally, it all "ends with a final series of passes in which the matador with a muleta attempts to manoeuvre the bull into a position to stab it between the shoulder blades and through the aorta or heart."

How does such activity sound to you? Though for many this is entertainment, it reads like systematized torture to me.

There are reasons why you might be more concerned about dogfighting in American than bullfighting in Spain. But such activity is worth at least as much vitriol as many people have directed at Michael Vick or the activities alleged to have occurred on his property.

But let's set aside the question of whether people who have been loudly critical of Vick in the past few months really hate dogfighting, or really hate Vick (for whatever reason).

Instead, let's consider the concept of misplaced hatred as a form of scapegoating.

In Toni Morrison's novel The Bluest Eye, characters frequently transfer what should be righteous indignation against a victimizer into hatred against an innocent party, creating more victims. There are many examples, explicit and implicit, of characters misplacing their hatred (and other feelings) throughout the novel. Some of this misdirected rage turns to self-hatred: several black characters in the novel internalize society's racist standards of beauty, and hate what they see as their own ugliness. But in the end, the entire community is able to transfer its self-hatred onto the innocent victim and scapegoat, Pecola Breedlove.

I would suggest that hatred gets misplaced in many of our attempts to make moral sense of our dealings with animals. This misplaced hatred becomes scapegoating, where people bring vitriolic indignation to egregiously cruel or indifferent treatment of animals to help downplay our frequent and accepted mistreatment of animals.

Make the connection between dogfighting and bullfighting. And keep looking, for there are more connections to be made.

(Image from Wikipedia Commons. Sorry if you're annoyed to read analysis of animal cruelty on a football blog, but you were warned at the beginning).
Posted by Pacifist Viking at 10:16 PM