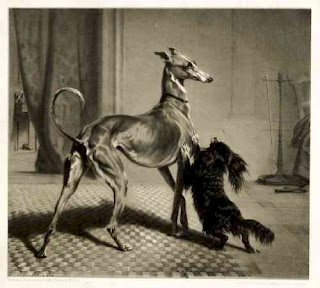 1. It's getting rather wearisome: everybody is chiming in with comments, and news about Vick is usually the top story on football pages of news sites. Training camps have begun--real football teams are practicing real football. I wish more attention could be devoted to that than to Michael Vick's legal situation. Still, among all the chatter, it's good to look at primary source documents. The Smoking Gun (via Hashmarks) has the plea agreement between the U.S. and Tony Taylor.

I'm mostly going to stick to my efforts not to focus a great deal of attention on this story, other than occasional brief comments such as this.

2. It has become very difficult to argue that there was no dog fighting operation at all on Vick's property. It has also become increasingly difficult to argue that Vick had no involvement. Still, it's also hard to argue with the NAACP, which argues for restraint from judgment and vilification of Michael Vick before due process of the law takes its course (Sports Illustrated).

3. Though nobody would call it such, have you noticed the version of "political correctness" that has emerged in this dog fighting story? See if you recognize the following pattern:

a. Current or former athlete says something that sounds tolerant of dog fighting and/or Michael Vick.
b. Many people and media members lambaste the athlete, usually in harsh, derogatory terms.
c. The athlete makes a statement apologizing for or clarifying his previous comments.

4. PETA is an organization I have respect for, but it also has two primary activities, in order:

a. efforts toward more ethical treatment of animals by humans.
b. self-promotion.

PETA is globbing onto the Vick dog fighting story because it is guaranteed to get it publicity (and I don't begrudge PETA for it). But PETA is wrong to demand Vick's employers' suspend Vick before he has been convicted. PETA usually uses its relentless tactics toward changes in corporate policies that actually impact treatment of animals. The unrelenting protests to get Vick suspended do not directly impact treatment of animals. PETA should certainly monitor and comment on this situation, but it would be better served showing some restraint, rather than making demands that really don't matter to its cause.

5. This story does, of course, relate to actual football: it seems unlikely that Vick will be playing with the Falcons this year, and that means Joey Harrington is once again an NFL starter. And look at here: the Falcons open the season at the Metrodome against the Vikings.

As Lion QB, Joey Harrington never beat the Vikings (the Lions last beat the Vikings in 2001). As Dolphin QB, he "led" his team to a victory over the Vikings (really, the Dolphins' two defensive touchdowns in the fourth quarter were more responsible).

So the Vikings are now opening the season at home, against a Falcon team that was 21st in team defense last season (29th in yards passing and 32nd in passing yards per attempt). They face a team with a new coach, and a team that might be without (or with a hobbling) Warrick Dunn. And this team will be quarterbacked by Joey Harrington.

The Vikings have a good chance to start the season 1-0, and for Tarvaris Jackson and Adrian Peterson to get a solid start to the season.

6. If you are interested in knowing more about somebody working to help animals, check out The Jane Goodall Institute.
Posted by Pacifist Viking at 3:13 PM