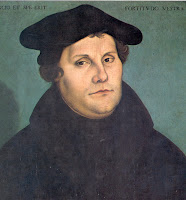 This is PV's Viking game post; for comments on other NFL stories and games, see "On the Couch, week three."

These are dark days for the Minnesota faithful. The Vikings have lost consecutive road games by 3 points. The offense is struggling terribly, producing just 10 points of its own per game. There seems to be no threat whatsoever in the passing game, and evidently no answers to the passing problems currently on the roster. The Vikings are 1-2 and may be squandering a great defense. Around the league, the Packers are once again good, starting 3-0 behind quality play from Brett Favre. Favre has just tied the record for career touchdown passes; he could break the record in the Metrodome in front of Viking fans. And onetime Viking hero Randy moss is helping the dominant team of the decade look even more dominant.

The world is bleak. But is there a studious monk at an obscure German university, ready to emerge and rescue us from our corrupted faith? We can only hope and wait: right now, all appears lost.

So close
In a 3 point loss, the Vikings were oh so close to between 10 and 14 more points. It appeared Visanthe Shiancoe caught a TD pass, but hte refs saw the play differently: the Vikes settled for a field goal. The Vikings were a few inches from completing a TD pass to Robert Ferguson. They were at least in field goal range, but took a sack and got no points. And another time they were in field goal range but took a penalty and a running play loss to get out of field goal range. The Vikings could easily have had 13, 16, 20, 21, r 24 points. And it is these types of losses that I take personally as a fan, mulling over for hours how it all could have gone differently.

The problem with instant replay
The quality of the network broadcast should not impact the actual competition of the game. Unfortunately, it does.

In the first half, it appeared Visanthe Shiancoe caught a touchdown pass. An official near the play saw it differently. The Vikings challenged the play, and from the video, it appears extremely unlikely that the ball hit the ground. But the referee did not see evidence to overturn the play.

Do officials have camera angles that are not shown on TV? I am not aware that they do. And unfortunately, Vikings-Chiefs was a fairly unimportant game, meaning it got a low ranked broadcasting crew. There were few good replay angles throughout the game. If the game were the Sunday night game, or even covered by the Buck-Aikman crew, there likely would have been more and better camera angles, and it may have been conclusive that Shiancoe did catch the ball. Unfortunately, no such camera shot exists.

The play cost the Vikings 4 points in a 3 point loss. I support instant replay, but I wish there were a better system than dependence on the quality of the TV crew's coverage of the game. If the NFL is going to rely on network coverage for a system that impacts actual competition, it may have to dictate more cameras be used.

Brad Childress
Let's say it: if the Vikings fail to make the playoffs this season, and the offense looks no better as the season goes along than it does now (meaning, scoring one touchdown a game), then the Vikings should FIRE CHILDRESS THEN!!!!!! I feel if a coach doesn't make the playoffs in three seasons, it is fair to fire him. But if in two seasons the team shows no significant progress offensively, then those responsible for the offense must be held accountable. I still think the personnel in the passing game is the problem; however, it is up to Childress to get the most production possible out of the personnel he has. With the instant production of Adrian Peterson and a strong offensive line, the Vikings need to produce something in the passing game this season. If they don't, it's on Childress to answer why they haven't.

Defense
The Viking run defense completely shut down Larry Johnson (the Chiefs kept trying to run, but it consistently failed: don't tell me the run defense is overrated because teams give up on it knowing they can pass). Unfortunately, the defense had two flaws Sunday:
1. There was no pass rush on Damon Huard.
2. Dwayne Bowe dominated Cedric Griffin in the second half
This Viking defense has been very impressive for three consecutive games, especially against the run. It is encouraging, too, how many of the team's solid defensive players are in their 20s: Kevin Williams is an All-Pro, and I'm extremely excited to watch E.J. Henderson play middle linebacker with the Vikings for the rest of his career--he's outstanding out there. And there are other good young defensive players: while the Vikings look like a bad team right now, they are clearly building a team to compete.

I'm having a lot of trouble talking myself off this ledge though.
Posted by Pacifist Viking at 8:24 AM