"In the shadow of their own endzone" 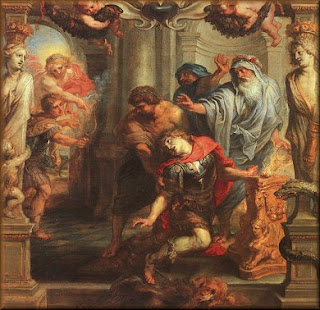 You all know I grow weary of cliches. However, I really despise botched cliches. Often overused metaphors are so overused, writers don't make the effort to even make the clear allusion, analogy, or reference. We are just expected to be familiar enough with the metaphor that we don't need illumination through image or reference.

"Young's passing accuracy was another Achilles that we might be talking plenty about this year."

There are two problems in this metaphor that you're not even supposed to notice because the metaphor is so familiar. First, it appears Banks is referring to "Achilles' heel." Achilles was a great warrior in Greek mythology; suggesting "Young's passing accuracy was another Achilles" gives perhaps the opposite meaning than Banks intended. Achilles' heel refers to a weakness.

And that leads to the other problem: Achilles was invulnerable except for his heel, which never got dipped in the river Styx. The metaphor of "Achilles' heel," then, refers to one small weakness in an entity that appears to have no weakness (and furthermore that this one small weakness threatens to bring down the entire entity). So it really doesn't make sense for one person/entity to have "another" Achilles' heel (assuming it was the heel and not Achilles himself Banks refers to): if a person has multiple weaknesses, it is a person with several significant flaws, and thus "Achilles' heel" doesn't really fit.

That's one of the problems of overused metaphors: they don't even require accuracy or clarity, since they are so familiar we recognize the meaning without accuracy or clarity. But that means they also fail to illuminate. "Achilles' heel" may be an overused metaphor, but it's still a delightful reference to Greek mythology, and it still evokes the necessary imagery to understand a situation. But if it botched ("Achilles" instead of "Achilles' heel") or misused (there really shouldn't be "another" one), it is just ugly.
Posted by Pacifist Viking at 2:33 PM