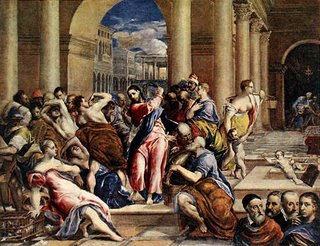 This photo shows Christ driving the Bears out of the Colts' way for Tony Dungy. It is also suitable for this post because it includes El Greco's Hall of Fame in the bottom corner (the real reason I picked it here).

The guys I liked (Michael Irvin and Thurman Thomas) made the Pro Football Hall of Fame. Read about it at the HOF website and at SI. Dr. Z also chimes in with a few comments.

And if anybody wishes, I can write the extended commentary on why Michael Irvin is better than Art Monk. Basically, you must look closer than cumulative numbers.

This isn't the sort of post pro-football-reference.com usually has in it's blog, but it's good.

The WBRS Sports Blog wonders if Rex Grossman's reign in Chicago is over. We hope not. We want Rex's craziness in Chicago for years to come.

The Big Picture wonders who the next big choker is.

Outsports has its Super Bowl commentary. And Outsports isn't enamored of Tony Dungy (but I am--while I agree with the scoffing at his comments, he does have a consistent belief system, he lives by it seriously, and he desires to share this belief system. That's not an inherently bad thing. I'm also not convinced that Dungy's work with this organization means he doesn't like gay people. Though that may be the case, this organization's values probably match up with a lot of other real pro-family issues that Dungy often champions. I've never heard Dungy trash gay people, though I've often heard of his work promoting responsible fatherhood).

And a college chancellor comments on the Bowl system in college at Inside Higher Ed. There are some thoughtful takes.
Posted by Pacifist Viking at 7:47 AM