The Next Ten: Reggie Miller 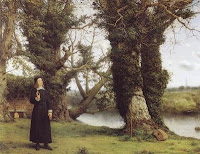 Reggie Miller may be the greatest shooter in NBA history. He's the career NBA leader in three-point field goals. He led the league in three-point field goals twice, and led the league in FT% five times. And he was no mere shooter that only got open looks set up by the rest of the team: he was a killer scorer that defenses needed to account for. His career scoring average of 18.2 ppg includes six seasons with over 20 ppg. And in the playoffs, he brought his game to another level. I'll never forget the 25 points he dropped in the fourth quarter against the Knicks all while taunting Spike Lee. And that's just the most famous of many great playoff performances.

You could make the argument that Miller doesn't belong on a list of the 60 greatest players of all-time. As I said, he's arguably the greatest shooter in NBA history, but he was never recognized as a dominant performer (though capable of occasional dominant performances). But if I left Miller off the list, I'd be deliberately leaving off the most accomplished three-point shooter ever, and that doesn't seem right. Plus I'd have the Beav to deal with.

Reggie Miller is akin to George Herbert. Herbert is best known for gimmicky poems like "Easter Wings" and "The Altar," poems that are actually shaped like the thing being described. But beyond these gimmicks, Herbert is a master metaphysical poet. His entire collection The Temple contains moving, thoughtful, invigorating poetry. Still, while Herbert deserves mention as an all-time great poet, one cannot say he was the best poet of his era--there are several 17th century poets that are superior. Miller, too, is known as a somewhat gimmicky, one-dimensional player: he's one of the all-time great three-point shooters, and his clutch playoff performances are the stuff of legend. But Reggie Miller's gimmicky career added up to the sum of 25,279 points. He's an all-time great player by any standard. And like Herbert, Reggie Miller was never the best player of his era (he was never even all-NBA first OR second team), but he is memorable and great.