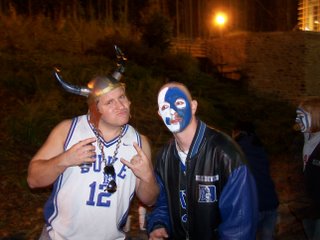 Okay, I promise that this will be my one and only post entirely about nothing but Duke Basketball. Well maybe not the only one. I still hope the stars align and somehow the McRoberts led Blue Devils get to dance last in April, then I will obviously have to post about Duke Basketball if this happens.
But now on to the post about the Duke Blue Devils. This whole post is basically a stream of conscience reaction to Seth Davis' article on Yahoo.Com. You can find it here. For the most part I agree with Davis. Anyone who has closely followed the Devils will admit they are not the 5th best team in the country. I am a very close follower and I can say that my Cameron experiences this year have been heart attack worthy at times. This is a Duke team searching for its heart and soul leader to rally around. McRoberts appears to be emerging, but I think Paulus will have to be the guy if they are going to be serious contenders. Right now they are not clicking on offense, but thankfully their defense has been spectacular.
Where Davis annoyed me was when he stated, "If last year's J.J. Redick-Shelden Williams-led group couldn't get past the Sweet 16, it's hard to imagine this one will." Why is it hard to imagine? It's not like Duke experienced great success during the Redick-Williams years. 2003, 2005, and 2006 they didn't advance past the Sweet 16 and 2004 they made it to the Final Four and collapsed against UConn. Side Note: I wish Luol Deng would have stayed around. The problem with last year's team was that it was far too dependent on JJ and then Shelden. LSU took JJ out of the game and that was it. This years team is different. While there is not JJ-type dominant player the multiple threats of offensive weapons allow different players to step up in each game and go to the hot hand. While I have no visions that Duke will be dancing in April, I think they could suprise alot of people come tourney time. I know I said earlier I was thinking a #3 seed, but now I am thinking a #4 or #5 and some shock. Sweet 16 for sure, hopefully more.
Posted by Blue Viking Devil at 10:35 PM