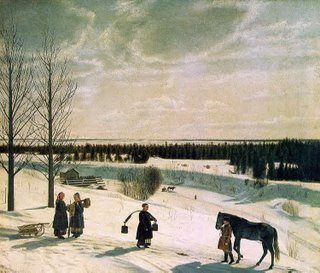 Now is the time of year that announcers make their few trips each winter to places like Chicago, Green Bay, and Denver, to watch games outdoors in cold weather. These announcers usually become utterly fixated on talking about the weather; over and over throughout the game they talk about how cold it is and how the cold affects people. These announcers act like it is some sort of aberration to be outside in the cold for an extended period of time.

I'm not sure these announcers realize that there are people, lots of us, who live in this cold weather for the entire winter. I don't think they realize that many of us don't mind it, and some of us even like it. It's just "blah blah blah, it's cold." Tony Siragusa suggested yesterday that there's no way Brooks Bollinger could have mobility coming straight into the game from the cold because his body will be too stiff; of course, Bollinger grew up in Wisconsin and probably knows more about moving in the cold than Siragusa.

We like the cold. We live in it all year. No, John Madden, you don't just tolerate it, you do get used to it. When Blue Viking Devil comes up to visit in the winter from North Carolina, the cold affects him in ways that it doesn't affect me.

Later this week: a look at the Viking roster and the draft
The Vikings have not acquired an elite football player since 1999 when they drafted Daunte Culpepper. There have been no elite offensive players drafted since then, and I'm not sure there has been a single elite defensive player drafted since I started following football in 1992. I think the Vikes currently have three elite football players on the team: Pat Williams, Antoine Winfield, and Steve Hutchinson. All were acquired through free agency. Let's just say I'm losing my optimism about the Vikings' future.

What we learn during commercials
Here's a quote from Sunday:
Commercial: "What, you couldn't find a car you like in Germany"...(pause, fast driving) "No, I couldn't find a speed limit I liked in America"
A Bit More Humid: "America sucks!"

Here's another quote from Sunday:
Lance Armstrong: "Hey cancer, remember me?"
Possible Flurries: "If I were cancer I'd say, 'You know, I meet a lot of people...did you used to be bald?'"

I, for one, think that the indignant cavemen in that insurance commercial need their own sitcom. I want to hear that caveman's conversation with his mother on speaker phone.

During that commercial when they say, "There is nothing on God's green earth stronger than a U.S. army soldier," we speculate on whether that means creatures in the ocean might be stronger. We don't know whether to take a shark or a whale over the soldier.

Also, we speculate that when the woman in the drive-thru line is picking up her dry-cleaning, and pays for that guy's shirts and leaves her number, that the guy might be married and she might be a home-wrecker.

You better believe that when you don't have an extensive cable package you're watching every single commercial during a football game.

Brett Favre's 2006 is going a lot like his 2005. He started the year playing some solid football--he still had the crazy game-killing INTs, but he was throwing a lot of TDs. As the season wore down so did Favre, and he started throwing less TDs and more INTs and the team lost more and more.

Coming off the ledge: Bears 23, Vikings 13
Perhaps the Revolution has begun; we may never see Brad Johnson take another snap for the Minnesota Vikings. If it is the case, there is no question it came much too late. In the last month and a half, a competent QB (one with some mobility and some zip on his passes) may have turned some ugly losses into wins.

We can now say without question that the Vikes made a mistake in relying on Brad Johnson as their starter. I think prior to the draft they were considering ways to bring in a younger QB to compete with Johnson for the starting job. When nothing really came of it, they committed to Johnson and refused to bring in a backup for more money than Johnson makes (because they, rightly, didn't want to have to give Johnson a raise). Then they were left with Johnson and questionable backups in Brooks Bollinger and Tarvaris Jackson.

I really dislike Brian Urlacher and Olin Kreutz. They're replacing Favre as my most detested players in the NFC North. I also hate Tony Siragusa, but that's neither here nor there.

The Vikes were in the game much of the way. It was 7-6 late in the third quarter. Then, in an amazing flourish that took only a few minutes, turnovers suddenly were hurting the Vikings, as Johnson had one INT returned for a TD making it 14-6, had another INT give Chicago short field position which led to a TD and a 21-6 score, and Ciatrick Fason made an inexplicable decision to get tackled in the endzone to make a 23-6 score. Bollinger led one TD drive to make it 23-13, and there we were.

Once again, the Viking defense did its job. The Bears' running game never killed the Vikings, and Sexy Rexy did nothing to hurt the Vikings; indeed, his 3 INTs should have done more to help. In fact, the Viking defense gave up just 7 points, and that came with a short field after a BJ INT. A safety, an INT TD, and a PR TD. That killed off the Vikings. The Viking defense and special teams forced plenty of turnovers (5) but couldn't score directly, and the Viking offense was unable to capitalize on those turnovers. The Bears defense scored its own points and allowed the offense to score once.

The Viking running game was outstanding: Chester Taylor had 90+ yards before leaving the game with injury, and Fason carried on the success with 70+ rushing yards. I have a basic maxim for football: "If you CAN keep running for first downs, there is no reason to throw the ball." This is especially true when it's cold and windy, you're facing the Bear offense, and your quarterback has a gimp arm. The Vikings were consistently able to run the ball but continued to call pass plays at awkward times that killed drives and led to turnovers.

Well, I'm not ready to give up. I remember attending a game in '93 against the Cowboys. The Vikes were 6-6, lost badly to the Cowboys to fall to 6-7, then won three straight to get into the playoffs (where they lost, of course). The Vikes COULD win four straight. When I do give up, I will grace you with my annual poetic mourning.

And college football
I'm glad Florida will get their chance to compete for a national title against Ohio State. Now, I think the Buckeyes will utterly destroy the Gators, but at least they deserve their chance.

Of course I'm happy about UCLA's win over USC. I made the existential choice to follow a particular college team because I wanted to be able to follow and understand college sports better. One thing I've learned is that the ability to beat rivals means as much in college football as overall winning percentage. So that's a pretty exciting thing for the Bruins. Maybe they can build on this.

Of course, the only team really worth getting excited about at UCLA plays their games on the hardwood.
Posted by Pacifist Viking at 7:23 AM