More philosophy on effort in sports 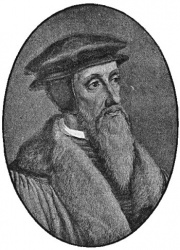 Yesterday I used Marxism to try debunk one ethical argument about effort in sports. Today I would like to attack another common argument about the ethics of hard work in sports: the "he owes it to himself" argument.

I've heard this argument used against every "underachiever" from Ricky Williams to Darius Miles. The idea goes that a particular player is born with an immense amount of physical talent. By not putting forth his best effort, he is "wasting" that talent. The player "owes it to himself" to work hard and make the most of his talent--even if he doesn't like a particular sport that much, or even if he's happy getting paid millions and trying to enjoy his life. It is wrong (or unethical, or immoral) for such a talented player to "waste" his talent; if born with that talent, he has a responsibility to use it to the best of his ability.

This idea is a secularization of a religious concept. A Christian perspective on "talent" goes like this: everything you are, everything you are capable of, all your skills and talents, are a gift from God. You didn't do anything to earn them, they don't reflect on your own merit--they reflect on the beneficence of the Divine. Therefore, since God has given you this talent, you have a RESPONSIBILITY to use these talents for God's greater glory. You have a duty to use those talents--the effort of those talents and the fruits of those talents--for God. To waste a God-given talent is a sin.

In a secular world, we are often uncomfortable talking about what gifts come from God and what we owe God. Furthermore, we are rightly uncomfortable talking about millionaire adults playing a game with no real consequences doing their best to win to "serve God." Many of us think it is silly to talk about God in sports (If he wants you to win, does he want the other side to lose? Why does he care who wins a game--aren't there many other problems in the world to worry about?).

However, even a secularized sports world hasn't given up the ideology. Language of religion remains attached to talent: we talk about a player's "God-given abilities," we talk about a player being "blessed" with massive talent. When an announcer or commentator uses these terms, he is not usually (I assume) engaging in Christian theology or talking about the greater good of God. He is using that religious language to describe what is also often called "natural" talent.

But if the secular world now doubts that a person "owes" his talents to God, but we still maintain the ideology, to whom does he really "owe" his talents? We find other sources. "To himself." "To the fans." In the bourgeoise interpretation, "to the guy signing his paycheck." "To the sport." When in fact, no matter how much talent an individual player has, in a rational sense he owes nothing to himself, to the fans, or to the sport itself. If a person is "born with" (sort of a silly term itself--babies don't seem to have a lot of talent. Ricky Bobby likes to pray to the baby Jesus, though, the eight point, six ounce Jesus, learning colors from his Baby Einstein) a bunch of talent, there is no duty, responsibility, or debt to anybody. The person PLAYS A GAME--there's not a great deal of real responsibility in that.

Now, I do believe a player may "owe" effort to somebody in an ethical sense. In some cases, it could be argued he owes his coach the effort. In most cases, it can be argued that he owes his teammates the effort. Indeed, you can say that he can/should put in effort "for himself"; if a player is truly competitive and wants to win badly, he will/should put in as much effort as possible to win. But in that case the player would WANT to put in the effort, not feel he is morally, contractually, or ethically required to put in the effort.
Posted by Pacifist Viking at 7:40 AM