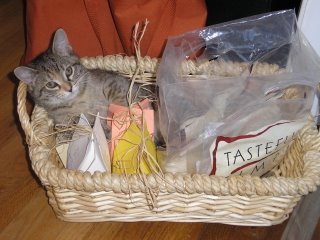 During the season, all I care about is the Ws and the Ls. A W added to the standings give me a bit of euphoria to take me through the week; an L brings me down and keeps me down until the next W. I don't care how the team gets the W, how ugly they look, or how great they look in an L. I don't care if my team entertains you; the Vikes have spent a decade or more entertaining you, now it's just time for them to win.

And for anybody trying to minimize a road win against a returning playoff team (and winner of a playoff game), remember that a year ago the word on the Vikings was their total inability to win outdoors. That looks to be the past, man.

Here's what I saw in the Vikings' 19-16 win over Washington.

Bombs Away.
WTF? I thought this was a ball control offense. Every other pass, including 3rd and short, seemed to be a bomb downfield.

Troy Williamson had two TERRIBLE drops, but he did catch some passes--and he showed the speed to beat CBs deep. He should force defenses to consider him and help spread things out for the rest of the offense.

Darren Sharper's hit on Santana Moss
Like no other sport, in football you can point to individual plays that make big differences in the final result. Darren Sharper's hit on Santana Moss in the end zone at the end of the first half knocked the ball out of an open receiver's hand, preventing a TD and leading to a FG. That's a 4 point play in a 3 point game.

Pass Rush
No sacks, no interceptions. A disappointment? Yes. But the pass rush was effective. Mark Brunell was forced to scramble and/or throw the ball away a lot (thanks to pass rush combined with good coverage).

The defensive linemen will get sacks. But even without sacks, they impacted the game Monday.

Cornerback Tackling
Antoine Winfield was strong as usual, dropping open field runners to the ground right where he hit them. I'd expect nothing less. But Fred Smoot made an impact tackling too. It's a huge help to the linebackers to have CBs around them that can make tackles.

Commitment to the Running Game
Brad Childress is a little bit Andy Reid and a little bit Barry Alvarez. It's good to see a team staying with the run in a close game, even if it's been less than stellar for parts of the game.

3rd Down
The Vikes were better on 3rd down, offensively and defensively, than they were during much of the Tice era (especially defensively).

My kitten
Traumatized by the beginning of football season. She doesn't understand at all that I'm dancing and jumping around the room.
Posted by Pacifist Viking at 8:10 AM