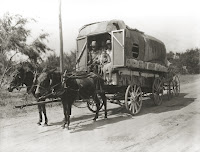 Vikings-49ers
What can we really say in way of a preview for this game? The Vikings are playing very well defense, offense, and special teams right now. The 49ers are a horrible football team and feature Trent Dilfer at quarterback. The Vikings should run for 200+ yards as a team, hold the 49ers to fewer than 14 points, and utterly dominate this game.

Of course, not only did we see the Vikes lose to the 49ers 9-3 last season, we've seen QBs like Rick Mirer, Chad Hutchinson, and Josh McCown lead their teams to wins over superior Viking teams in this decade. If the game were in Thunderdome, yeah, I'd feel good, but over the years the Vikings created in me a justifiable terror of all road games. Here's where I need wwtb? to say "PV, you're living in the past, man! You gotta live in the now! That crap doesn't happen anymore!" Yeah. I hope that crap doesn't happen anymore. I hope the Vikings are a better road team than they used to be--they seem to be, anyway.

(We just need to express this unbridled glee more often than we do).

So we're clear on this, right?
If the Patriots lose, in the regular season or (especially) the postseason, the Patriots and all their fans are going to blame the refs, right?

Jumping off the bandwagon bandwagon
"Our boat's not very full, I know that. We don't have a lot of people left in our boat right now."

Frankly, I don't even know what a bandwagon is. Is it a wagon with musicians on it? Or does "band" refer to a group of people, like a posse, getting together to go do or see something?

So I salute you, Jon Kitna, for seeking out a new metaphor.

The Colts are on TV!
It's weird--I get legitimately excited when the Colts are televised, and they play the Sunday Night game this week. It's like how I used to get excited to watch the Irvin-Smith-Aikman Cowboys or the Marino Dolphins. The Colts really are the only non-Viking team I really care to watch on TV anymore, though.

Dignity of all people
It really bothers me when relative income is used as an insult or assessment of a human's worth. Deadspin points out how Doug Gottlieb responded to insults in a chat (and indeed, I don't assume it's easy for Gottlieb to deal with these insults):

What is Gottlieb implying here? He is attempting to insult a reader by suggesting he has a low-paying, often disrespected job. He is insinuating that he has more worth as a human being because he works at ESPN (and thus has a good income) while somebody else is lacking in worth because he has a low-paying job. He is, in essence, "better" than somebody who delivers pizza.

Again, it's not easy for Gottlieb to respond to insults, and he should be given some leeway because he's responding to insults against him. But I still balk at this off-hand insult of a human being because of a job (can't a pizza delivery person have dignity too?), or because of money (for does our income determine the dignity we deserve?). If you wish to respond to insults with insults, OK, but isn't it rather tasteless to insult somebody in this way?

Links
Antoine Winfield will be back this week (Access Vikings). The Viking secondary played very well in his absence, but it's good to have him back.

A lot of people are making a story out of rookie RB Adrian Peterson facing rookie LB Patrick Willis (Vikings.com, Star Tribune, Pioneer Press). I don't think it matters at all, but people need their stories.

Just how bad is the 49er offense? Really, really bad (The Ragnarok).

A preview of the Viking-49er game (Grant's Tomb).

Several Viking players are still upset about last season's 9-3 loss at San Francisco (Pioneer Press). Uff da, that one still stings me too. The Vikings held an opponent to no touchdowns (and somewhere very near zero rushing yards) and still lost. They scored 3 points against a defense that was getting torched. A long Chester Taylor touchdown on a screen play was called back for a holding penalty that, as much as I stared at my television, I could not see.

The Vikings are tied with the freaking Patriots in Big Play Differential, and they lead the league in Big Plays (Cold Hard Football Facts). Shall we assume this is not the same team that could lose to the 49ers 9-3 last season?

There are some assumptions about what authentic masculinity is in Mike Wilbon's comments on watching women in lingerie (Outsports).

Corey Brewer's offensive game has been rough, but you have to like a swingman that can grab 18 rebounds in a game (On the Ball).

There has been a lot of reaction to the media response to Sean Taylor's death (Edge of Sports).

Weekend
It's freezing outside (this snow just seeps into your very soul--like a week ago it wasn't here at all, and now I can't envision a world without it), and it's a good weekend to whip up some chili and stare at a screen on which grown men wearing helmets run into each other chasing a weird-shaped object around the grass. Except for Adrian Peterson: he transcends the chaos, and instead runs around and past all those men trying to run into him. Enjoy your weekend, everybody. Except Lion, Cardinal, and Packer fans.

Addendum
wwtb? writes at Epic Carnival about "Sweetwater Jones," the T-Wolves promotional creation (and provides the funniest poster I've ever seen).
Posted by Pacifist Viking at 9:06 AM