Notes from Monday Night at Thunderdome 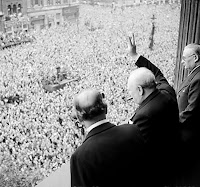 The Metrodome crowd was really into it. There were more Bears fans than I thought there'd be (and they were quite spirited, in a fun way), but it was really fun in the fourth quarter when everybody in the dome was standing and waving and yelling and cheering. Great atmosphere for an important football game against a big rival.

Did Lovie Smith fail to give his team one last chance to win? The Vikings had 1st and 10 with 2:00 left, but couldn't actually run out the clock kneeling down. The Bears had one timeout left. After the Vikings' third kneel-down to make it fourth down, there were more than 10 seconds on the clock. The Bears had another timeout, but they simply let the clock run out. If they called a timeout, they could have either went for an all-out punt block, or they could have let Devin Hester have one more chance at a game breaking play. A total brain-freeze on the Bears' coaches, I think.

If you're going to squib kick to avoid a great kick returner, why squib it to that great returner? Still, the Vikes did a good job containing Hester (their entire starting secondary was in on kickoff coverage). Hester, though, is so good as a returner that he plays by his own rules (rightly so). He fields punts nobody else would, pauses to look for openings when everybody else would be trying to gain any yards, and cuts back and around with abandon. A lot of times, the Vikings simply got lucky he didn't do more.

Kyle Orton is inept--and the Bear running backs are worse.

A solid pass rush from the Vikings in the second half really helped mess up an already horrid Bear offense.

Here's what I say about 100 times a game: WHY DON'T THE VIKINGS CALL MORE SCREEN PASSES?! With good RBs, good downfield blocking WRs, and good OL, the Vikings should be able to pick up easy yards with screens. They could also get Adrian Peterson in space.

Robert Ferguson's long catch and run was a lot of fun.

Before the game, we saw some Viking players walking into the Metrodome, including Pat Williams (a mammoth of a man) and Adrian Peterson. Peterson is a smooth character. He also gave the cheering fans a two-finger wave. A meaningless greeting, a sign for "victory," or a peace sign? Is there another pacifist Viking? I'm guessing meaningless greeting.

Sal Paolantonio, Steve Young, and Emmitt Smith were on the sidelines before the game, and Adrian Peterson ran over to talk to Emmitt Smith. The young RB from Texas hugged the great Cowboy RB and the two beamed giant smiles as they chatted for quite a while. Then Peterson was going to run back to warmups--completely ignoring Steve Young. I almost thought Steve Young felt a little bad, thinking "What about me? Don't you know you I am?" But Young got his attention before he left, and Peterson shook hands and chatted briefly with Young and Paolantonio. Compared to Emmitt Smith, Steve Young means nothing to Adrian Peterson.

Yeah, the Bear fans were lively and energetic, and interacted with Viking fans with good spirits. One guy wearing a Robbie Gould jersey (why?) held up a sign to us that read "#29>#28" and something or other about how Bear Adrian Peterson is better than Viking Adrian Peterson. He was just smiling knowing how stupid it really was, and we all just sort of laughed. There were a lot of smiling, laughing interactions between fans of the two teams. I sort of like Bear fans.

My back row section is getting rowdier and rowdier. I never drink during Viking games (I love watching the Vikings--I want to fully appreciate and enjoy the games, not dull my senses during the games); others don't feel the same way. In the back row, fans find a lot of things to bang on: a metal fence, the Coca-Cola ad, the metal ramp behind us. Fun times up in the nosebleeds. I love having the back row, actually--it's very pleasant not having anybody behind you during a game, and the crowd up there is pretty high energy.

Cheese curds: my one weakness. Actually, I have many, many weaknesses--I don't know why I should label fat-fried cheese my singular weakness.

Right now, I'm pretty happy to be a Viking season ticket holder. I wasn't sure if it would be a one-year experiment or not (I only got the tickets in late August to avoid blackouts), but I'm strongly leaning toward renewing season tickets and going to every home game I ever can. Attending the games is just too much fun (and in my seats, relatively cheap).
Posted by Pacifist Viking at 10:09 AM