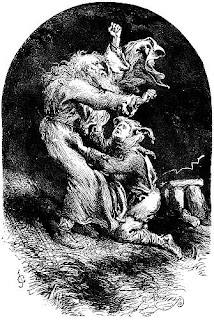 Vikings-Raiders
What right do I have to be confident the Vikings will win this game? None, but I am. The Vikings are playing at home against a 2-7 team with a bad offense. The Raiders certainly don't have the strength in the passing game to play to the weaknesses in the Viking pass defense. The Vikes can't really pass, but Chester Taylor is a competent runner. And the game is at home.

This should be a Viking win.

However, we must also remember that the Vikings are a 3-6 team with bad offense, so the game should be close and could go either way. And there's also the distinct possibility that many of the players are in the process of quitting on Brad Childress.

This Raider game will probably reveal to us the nature of the rest of the season. If the defensive players continue to play hard all season (and proud players like E.J. Henderson, Kevin Williams, Pat Williams, and Antoine Winfield should), the Vikings can still have close games all season long. If the Vikings come out flat defensively (they're going to come out flat offensively because they are flat offensively), it's probably a sign that the team doesn't care too much anymore, and things will disintegrate for the rest of the season.

I'm still excited to go to the game. Chester Taylor is still a good running back. The defense often makes exciting plays, especially against a weak offense. Daunte Culpepper is leading the opponent. The Metrodome atmosphere is still fun. Sunday should be a fun day.

Daunte Culpepper
Daunte returns to Thunderdome. In August 2005, Daunte Culpepper was coming off one of the all-time great seasons, the team had been built and focused around him, and Culpepper appeared ready to lead the Vikings to another level of glory (some national writers, such as Peter King, picked them to go to the Super Bowl). It all fell apart just so quickly. Daunte had some bad games early in the season (it wasn't all his fault--the protection was awful). Then the Minnetonka boat incident happened. Then Daunte got hurt. Then he bickered with the team via emails to the media. Then he was traded. And now he's on his third team in three seasons.

How did this happen? How did such hopefulness turn to such hopelessness, for Culpepper and for the Vikings, so quickly? When I look down at #8 for the Raiders, am I really seeing DAUNTE FREAKING CULPEPPER? I just don't feel the same emotional commitment. I wish him the best. Maybe after Childress is fired, the new coach of the Vikings will try to woo Culpepper back to Minnesota. That would be nice. I sort of miss him.

"As flies to wanton boys, are we to th' gods, They kill us for their sport."
I'm teaching King Lear right now, and something about the crazy old man out on the heath yelling up at the storm resonates with me. I envision the world of King Lear as a vast wasteland, open and empty space devoid of divine justice, where Nature hurls its terrors down upon weak and vulnerable humans. Today I read Lear's rail to the storm (and the cosmos) to my class:

"Rumble, thy bellyful. Spit, fire. Spout, rain!
Nor rain, wind, thunder, fire are my daughters.
I tax not you, you elements, with unkindness.
I never gave you kingdom, called you children,
You owe me no subscription. Then let fall
Your horrible pleasure."

Somehow, that world of Lear is akin to my view of Minnesota in January and February. Hard snow, freezing cold, dirt and breath everywhere, as a vulnerable people hide from the terrorizing elements of Nature. Indeed, when I think about attending Timberwolves games, my impression is zero degree weather, seeing my breath as I walk through the dirt and ice encrusted sidewalks into the Target Center.

Readers of this blog will not be surprised to find the desolate landscape and worlview of King Lear touching on my feelings as a Viking fan. Eventually I'll reach self-parody, as every possible work of literature just reminds me of the Vikings--hell, maybe I'm already there. But literature is how I make sense of my life. And King Lear speaks to me. Rooting for the Vikings is like giving everything to your ungrateful daughters, then having all your pleasures taken away and getting locked out in a storm, where the elements pound on you, your Fool mocks you, and your company for conversation is Tom o' Bedlam. OK, we've already reached self-parody stage. Such is life--I even hate myself.

Pro-football-reference.com is in the process of undergoing some big changes, and you can read about those changes at the Pro-football-reference.com blog. My favorite feature at the moment is the AAFC data (look at Otto Graham!), but there is just an immense amount of new information, including more roster information, older team information, and more detailed statistics. Though there's always an adjustment period when a beloved website makes changes in the format, P-F-R is the best football database there is, and now it's adding even more data. That's really good news.

Dave Zirin suggests municipalization for the Seattle Supersonics. It's a beautiful dream that will never be allowed to happen. I shouldn't say never: if people like Zirin can try push the idea, perhaps someday there will be a better way to run pro sports than letting teams that are owned by billionaires play in stadiums funded by state and city tax dollars. If we can suggest that owners pay for their own stadiums, we can also suggest that cities and states paying for stadiums have some ownership over the teams. It's not such an outlandish idea: when Zygi Wilf asks the state of Minnesota to help pay for a new Viking stadium, the state could demand a certain percentage of ownership over the franchise in return.

I don't follow baseball (though I'm going to start following the Twins--more on this later), so most of what I know about Barry Bonds I've got in bits and pieces from various sports blogs I read. But Will Leitch and Dave Zirin have compelling takes on the new indictment.

Weekend
Enjoy the weekend everybody. Except Packer fans.
Posted by Pacifist Viking at 12:28 PM