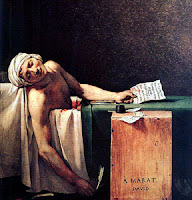 Revolutions rarely take quickly. The French Revolution brought the Terror and an Empire and more Monarchy before it really brought a Republic.

So don't despair, Tarvaris revolutionaries. The Revolution lives. Tarvaris Jackson will likely return this Sunday (SI), and Tarvaris's early struggles are merely this Revolution's Reign of Terror. Perhaps we'll still have to endure a Napoleonic Empire and restoration of the Monarchy, but there is hope that the Revolution can still take root among a weary and wanting people.

Vive la Revolution!
Posted by Pacifist Viking at 9:39 AM