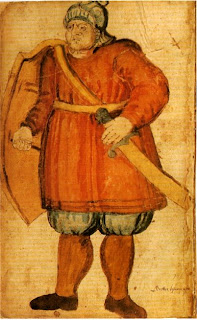 The Colt Defense
So what do we make of this Colts' team? I'm not sure what defense is actually making the journey to Thunderdome this weekend.

The 2006 Colts had an awful, awful run defense: they were last in the league with 2,768 yards allowed and an absolutely stunning 5.3 yards per attempt allowed. Then they somehow put it together to win four playoff games, including the Super Bowl. Then the 2007 Colts ranked #1 in points allowed and sixth in yards per attempt allowed at 3.8. The change was largely attributed to Bob Sanders, who played just four regular season games in 2006 but 15 in 2007--Sanders was the '07 Defensive Player of the Year.

Then last week the Colts allowed 183 yards rushing, 123 from rookie Matt Forte. The play you will remember is Forte's 50 yard touchdown run, but the Bears were also 10/16 on 3rd down: the Colts had trouble getting stops against the Bears. That's right, the Kyle Orton Bears.

Is there any way to know what quality of defense we should expect to see from the Colts this weekend? We might see the sort of defense that would allow Adrian Peterson to rush for 200+ yards, but we might see Bob Sanders and friends stymie the Viking offense (I don't know if I've ever written out the word "stymie," and I really wanted to see how it felt).

It should come as no surprise who will be the Vikings' key offensive player:

Adrian Peterson
I think the Viking offensive line will be successful against the Colts' front seven: they will be able to open up lanes for Peterson to run. And we should look forward to seeing Peterson churn out five yard, seven yard, eight yard runs. But Peterson in the open field can do so much more. If he can make one or two Colt defenders miss, he can be gone for a touchdown. And if Peterson is able to rip off two or three very long runs, not only will he be directly scoring for the Vikings, but he'll force the Colts to try and stick a finger in the dyke (I don't know about this image of the finger in the dyke). And then maybe the Vikings can open up and gain yards and first downs passing, too (if Kyle Orton and the Bears can do it...right? right?).

The Colt Offense
Over the past decade, the Indianapolis Colts have had an historically good offense. The Colts have ranked #5 or better in both points scored and offensive yards gained an incredible eight of the past nine seasons.

We should be encouraged that the Bears went on the road last week and held the Colts to 13 points (well, maybe not "encouraged," since we do have to play those Bears twice). Peyton Manning missed all of preseason, center Jeff Saturday and tight end Dallas Clark have been injured, and the Colts just might be vulnerable right now. At least, that's what we'll have to tell ourselves, because this offense can be downright terrifying.

The Vikings should be able to curtail Joseph Addai (I'm not sure I've ever used "curtail" in this context: I'm trying all sorts of words): the Vikings have the defensive players to disrupt running plays and stop the Colts' stretch play behind the line of scrimmage. I foresee a lot of big plays from Kevin Williams in particular: he's a dominant interior lineman that the Colts will struggle to contain.

And that's why it is absolutely crucial that the Vikings can generate a pass rush. If the Vikings don't put consistent pressure on Peyton Manning Sunday, he will throw for 400 yards. There are reasons to be hopeful the Vikings can, indeed, generate that essential pass rush. They're back at home, where they'll have the turf and the home crowd for support. Despite a poor game Monday, Jared Allen has the ability to put a strong outside rush on. The Peyton Manning of years past could dissect and destroy a blitz, but the Peyton Manning of week one could not: if they front four isn't rushing him, the Vikes can afford to bring more. And finally, the way to really disrupt Manning and the Colt offense isn't really from a blitz, and it's not even from an outside pass rush, which Manning can step away from. The wy to really disrupt this offense is from an interior pass rush. And the Vikings can bring that. They've got two dominant forces in Pat Williams and Kevin Williams, who are both effective not only at smothering the run, but at getting penetration into the pocket and disrupting a pass play. And so we come to the key defensive player:

Kevin Williams
If Williams is on his game, he can have a gigantic one-man impact in stopping the Colts' offense. They run that stretch-play (which they turned into a toss week one), and Williams can get a quick burst through the line to force Addai away from where he wants to go. And against a Colt offensive line that looked shaky stopping Bear rushers up the middle, he can also use his quick burst to force Manning to make quicker, rushed throws. He can knock down passes, he can force incompletions, and he can knock down the quarterback. I expect and hope for a dominant game from #93. And it will be hard for the Colts to adjust to his presence: they can't lose focus on Pat Williams or E.J. Henderson making plays, either.

If the Vikings win this game (and I believe they can), it will be in large part because Kevin Williams was able to control the game from a defensive tackle position.
Posted by Pacifist Viking at 7:56 PM