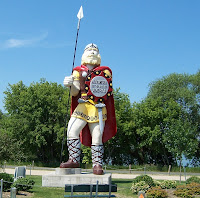 The two NFC North games that matter
Vikings v. Giants (in Thunderdome)
If the Metrodome ever mattered, it will be Sunday. If the Vikings win, then there will be a playoff game in the Metrodome the very next week.
This is a game when the Vikes could miss Pat Williams badly; Giants RB Derrick Ward has 948 yards (5.7 per carry), Brandon Jacobs has 1,089 (5.0 per carry), and Ahmad Bradshaw has 347 (5.7 per carry).
Eli Manning has been terrible against the Vikings, throwing four interceptions in a 2007 game and four interceptions in a 2005 game.
Bears @ Texans
The triumvirate of Matt Schaub, Andre Johnson, and Steve Slaton may be able to break the Chicago defense apart.  Or balls could bounce off punt returners' feet, the Bears could block field goals, and a Kyle Orton led team could win its 10th game.
The Residents of the state of Texas are 5-2 at home; the Bears are 3-4 on the road.
The other games with playoff implications
Dolphins @ Jets
Chad Sexington gets to try beat his former team. This, you've heard from every person who writes about football. Except the part about calling him Chad Sexington.

Cowboys @ Eagles
Holy Crap, does this game look good. Hopefully on Sunday the Vikings have already clinched the division, and we can relax and watch this game.

Broncos @ Chargers
I'm slightly intrigued because I wonder which team will have a better chance of upsetting Indianapolis in the Wild Card playoff game. The Chargers are a better team and can play the Colts close (evidence), but the Broncos play in Denver and could have a snowy, cold game, which could trouble the Colts.

Patriots @ Bills
Have I missed the "Tom Brady is a system quarterback and 2008 proves it" discussions? I assume they are happening on message boards and such.

Jaguars @ Ravens
The Jags just don't look like they have a spoiler game in them.

Oakland @ Tampa Bay
My wild guess is the Bucs make the playoffs.

MVP (is AP the most valuable Viking?)
I really think Peyton Manning will win MVP now: his numbers are good, his team is in the playoffs, and he's getting a lot of praise for gutting the Colts to some close wins. Adrian Peterson just fumbles too much--he could come back into MVP contention with a domination Week 17 game in a Viking win, but I don't think it will be enough.

And in my opinion, Manning deserves it more than AP. Peterson has had some spectacular games in some important Viking wins, but the Vikings are a defensive football team: they've won because the defense has controlled the game (in fact the Vikes have lost some games despite great defensive efforts because of offensive turnovers or offensive insufficiency). I don't think Peterson is more valuable to the Vikings than Manning is to the Colts. In fact if I had to pick one Viking player, I might even say Jared Allen is more important to the Vikes than AP. The Vikings have a lot of good defensive players (Kevin Williams, Pat Williams, and Antoine Winfield rightly join Allen in the Pro Bowl), but it is the addition of Allen that has made the Vikings a fierce pass-rushing team (tied for 4th in sacks) and a complete defense. Chester Taylor is a good running back that can competently replace AP when needed, but the Vikings don't have a DE that can have anywhere near the impact Allen can. I might even say AP is the third most important player on the team, behind Allen and Kevin Williams, a dominant force in the middle that stuffs the run, rushes the passer, and generally disrupts offensive plays.

I love AP (except the fumbling); I just think the defense has been more important than the offense, and that some individual defensive players like Jared Allen and Kevin Williams have been more important to the Vikings' success than AP.
Did you see the Viking episode of How I Met Your Mother?
In the episode, Marshall (a Minnesota native) takes Robin to a Minnesota bar, where everybody wears Viking clothing and complains about the '99 NFC Championship game.  Here's a clip.  It's silly but it was enjoyable to see all the Viking clothing and such.
Links
Robert Smith's advice to AP about fumbles (Pioneer Press).

Ray Edwards and Gary Larsen (Pat Reusse). This is one example of the advantage of having a sportswriter cover the same team for decades.

What's Marvin Harrison without Peyton Manning (pro-football-reference.com)?
T-Jack starts (Access Vikings, Viking Update).
TNABACG is also having flashbacks.
So it was Esera Tuaolo's fault (Out Sports).
Adrian Peterson has a healthy lead for the rushing title.
Week
An early National Fun League post again, for another unpredictable week: there may or may not be more posts this week.
Happy Festivus!
Posted by Pacifist Viking at 11:18 PM